This painting arrived into the studio framed however, the owner had watched strong brown discolouration develop in recent years. For a painting which has survived since 1890, this rang alarm bells.

Removing the painting from its frame revealed the previous framer had roughly torn off the original backing layer, leaving intact the more tenacious fragments to the left and right edges. The painting had then been re-framed without the insertion of a new backing layer. Extensive browning resulted where the wooden backing board had given off volatile acids, causing damage to the unprotected paper.

The severity of the damage necessitated bleaching, an extensive treatment best avoided if possible. However, treatment was carried out with the chemical stability of the painting in mind as well as the physical appearance; thorough rinsing of chemicals and replacement of essential minerals lost during the process was controlled throughout to restore the painting back to health.

While it was not possible to remove every trace of discolouration due to a high risk to the pigments, there was a substantial improvement and the painting was fit to be displayed again.

Such an example highlights the importance of correct conservation framing.

Bleaching, washing and deposition of an alkaline reserve following solubility testing of all pigments. Re-framing to conservation grade standards. 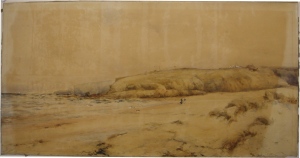 Verso, showing the intact backing paper (dark brown) which correlated perfectly with the undamaged areas of the recto, (front). 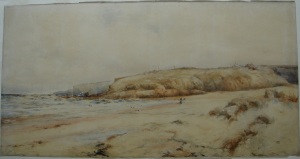